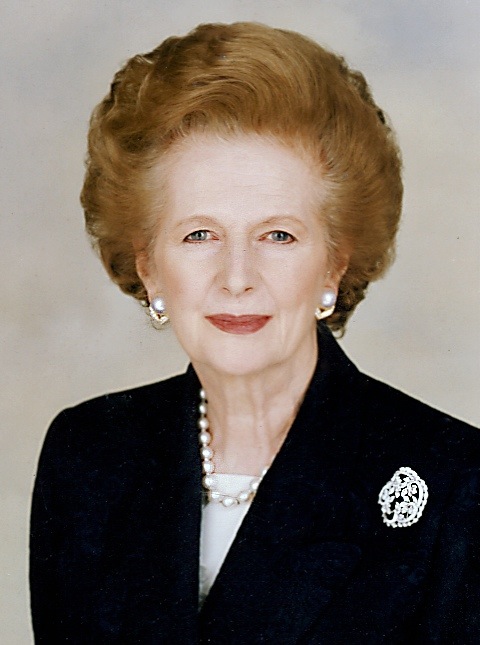 RIP to Margaret Thatcher former prime minister of Great Britain. Margaret Hilda Thatcher, Baroness Thatcher, LG, OM, PC, FRS, née Roberts is a British politician, the longest-serving Prime Minister of the United Kingdom of the 20th century, and the only woman ever to have held the post.

Baroness Thatcher was one of the most influential women in politics. Keep reading for more details on her life and her death.

Margaret Thatcher, the only three-term prime minister of Britain in the 20th century and the first woman to lead a Western democracy, died Monday reportedly of a stroke. She was 87.

Thatcher served as prime minister from 1979-1990 and is best remembered for having revived the British economy throughout the 1980s. With conservative values that matched the likes of Ronald Reagan, Thatcher is credited with spreading both economic freedom and socially divisive policy in Britain.

Born Margaret Hilda Roberts on Oct. 13, 1925, Thatcher grew up in Grantham, a small town in eastern England. She was raised by Methodist parents, Alfred and Beatrice Roberts, who belonged to a close-knit community and congregation in Grantham. Her father operated a grocery store and the family lived in the apartment upstairs.

After attending a local state school, Thatcher was accepted to Oxford University in 1943, where she studied chemistry at Somerville College. While at Oxford, Thatcher was elected president of the student Conservative association. She chose to enter politics after graduation and ran as a Conservative for the Labor-held seat of Dartford in the general elections of 1950 and 1951. Thatcher was the youngest female candidate on the ticket and although she lost, the experience confirmed her interest in politics.

Thatcher was trained as a lawyer in the 1950s and specialized in tax law. In 1951, she married businessman and oil executive, Denis Thatcher. The couple produced twins in 1953, Mark and Carol.

In the 1960s, while the Conservatives were in opposition, Thatcher emerged as a senior figure in the party, serving several consecutive years as a shadow minister. The conservatives eventually took office in 1970 under Edward Heath and Thatcher was appointed education minister.

Thatcher’s experience as education minister in the Heath government was a difficult one. She was vilified by the opposition and was frequently confronted by student demonstrations. The Heath government was largely viewed as a disappointment. They had run on a platform of economic revival by taming trade unions and introducing more free market policies. The promises made by the Heath government went unfulfilled and they were ultimately defeated by the Labour party in 1974, leaving Britain in a severe state of inflation.

After the collapse of the Heath government, the Conservatives sought new leadership. Margaret Thatcher stepped up to the calling and successfully ran against Heath to the win the Conservative party nomination in 1975. As a result, Thatcher became the first woman to ever lead a Western political party and serve as leader of the opposition in the House of Commons.

Viewed as a fiscally irresponsible government, the Labour party steered Britain into a state of virtual bankruptcy in 1976. After experiencing a massive drop in the value of currency on the foreign exchanges, the government was forced to take out a loan from the International Monetary Fund. The British public began to lose confidence in Labour and in the elections of May 3, 1979, the Conservatives won a parliamentary majority. On May 4 of that year, Thatcher became prime minister.

In her first term, Thatcher promised to turn around Britain’s declining economy. Already deep into a recession and with a rising unemployment rate, her skills at balancing the budget were quickly put to the test. Thatcher’s long-term gain soon became evident. With the economy entering a recession and inflation rising, interest rates had to be increased to control it. Inflation eventually decreased and interest rates were lowered because of Thatcher’s decision to raise taxes during the low point of the recession. Steady economic recovery continued throughout Britain.

Political support for Thatcher resulted not only from her fiscal turnaround but also from the Falklands War. After the Argentine Junta’s invasion of the Falklands in 1982, and once U.S. and British diplomacy had collapsed, the British military forces were dispatched and reclaimed the Falklands. The British public took note of Thatcher’s aggressive approach to foreign policy and decided to reelect her in the 1983 elections.

Thatcher was challenged early on in her second term as prime minister by the miners’ union, which held a year-long strike from 1984-1985. The strike turned out to be the longest and most violent protest in British history. Eventually the union was defeated and Thatcher ossified her status as an economic reformist.

During the miners’ strike, the IRA attempted to assassinate Thatcher by bombing the hotel she was staying at during the Conservative Party Annual Conference. She managed to escape unharmed, though several of her colleagues did not. By refusing to meet the IRA’s political demands during the prison hunger strike in 1980-1981, Thatcher had aroused enormous resentment by the militant group.

Amid accusations of a tired government, Thatcher pressed on in office and managed to convince the British public to allow her a third term as prime minister. Thatcher promised a change in her leadership style and assured her electors that the British economy would continue to improve.

Thatcher outlined an ambitious third term in office. She vowed to reform the education system with a national curriculum, issue a new tax system for local government and introduce legislation to separate purchasers and providers within the national health care system.

Thatcher’s role in foreign policy included contributing to the end of the Cold War. She supported a Western alliance against a Soviet threat. Her strong support for defense policies during the Reagan administration earned her the nickname, the “Iron Lady,” by the Soviets. Thatcher played a formidable role in diplomacy during the breakup of the Soviet Union in 1989-1991.

After helping to bring the Cold War to an end, Thatcher faced problems regarding European integration in the early 1990s. Skepticism in her own cabinet indicated that it would be unlikely for her to win a fourth term for the Conservatives. She resigned in 1990 and was succeeded as Conservative leader by John Major.

In the years following her premiership, Thatcher toured the world as a lecturer and completed two books on her experience in politics. In 2002, after suffering several strokes, Thatcher announced that she would end her public speaking career. Denis Thatcher, her husband of more than 50 years, died the following year.